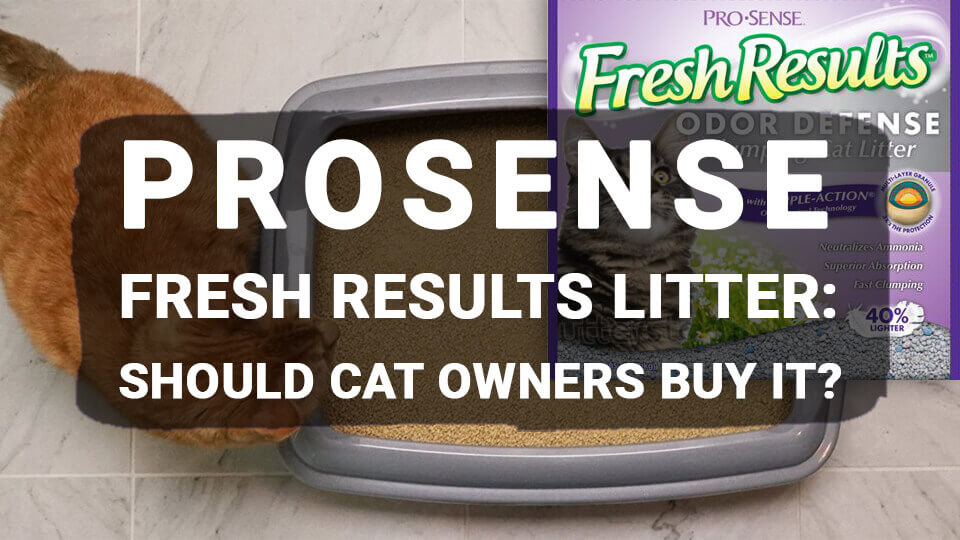 The Fresh Results Cat Litter is created by ProSense, a company that has been in the industry for a long time now. However, their litter products are fairly new, expanding from their usual products. But are their litter selections as good as the other products they offer now?

They don’t have the wide selection yet, but I chose the two most popular types according to reviews to help give you more of an idea about their litter. So if you’re considering ProSense Fresh Results Cat Litter, read on! I’ll show you the extensive review of both cat litters and more on ProSense’s company.

ProSense is actually a company that’s not most popular for its litter products, but for the medical solutions they offer for cats and dogs. On their website, you’ll see more solutions made for teeth, joints, skin, and coat, as well as vitamins. Just recently, they have expanded to other litter types, which fits well in the premium litter category.

This is a pretty interesting expansion, considering that they are well-known for their healthcare and wellness needs for pets. Because of their expertise on what cats need, this can show promise and put hem to an advantage with the cat litter they have to roll out.

Currently, their litter selection isn’t vast, with only two popular cat litters from them today. These are the two I’ll be reviewing to see if they are truly worth the investment.

If you’re looking for something made of silica crystals for its excellent maintenance, then you might want to consider this litter. This is advertised for those who love silica-based cat litters without the typical minor issues it has. Just like most of the many crystal-based litters available, this litter is exceptional in terms of locking in odors.

Another thing to note is that because it’s made of crystals, it’s completely dust, an advantage to sensitive cats just the same as the ingredients present in pretty cat litter. You can purchase this only in eight-pound bags, making this a good choice for those who only have one cat.

Take note that with silica-based litter, it does NOT clump at all. Rather, you scoop away solid waste and the litter would absorb moisture and/or urine. Once it begins to smell or appear very used, you simply throw it away and pour in a new batch.

While this may seem wasteful, it’s actually cost-efficient because the litter lasts longer and locks in odors better compared to other clumping litters. It can last for over a week, even more in single cat households. This lessens the hassle of having to constantly scoop clumps every day, and I just need to throw it out once a week or so.

As for its scent, I like the fact that there is NO smell at all with the product. This is a huge selling point for the Fresh Results Cat Litter, making its lack of artificial smells best for sensitive cats. For cat litter products with odor eliminating I would also suggest to try scoop away litter.

Just like all silica-based litter, this product can lock in odors from feces, ammonia, and urine quite well. It’s another huge benefit to owners who have high-traffic areas and suffer from strong odors cats make when doing their business.

The silica crystals are able to soak up all odors and lock it in until it’s time to replace the litter.

Ease of Use and Cleaning

Like I mentioned with its non-clumping abilities, it’s quite easy to use and clean since you just need to replace the liter every now and then.

However, for its expensive asking price, it’s quite messy to use in terms of tracking. This is because the crystals are smaller and easier to get stuck between paws and fur, finding its way out of the litter box.

But for me, the tracking isn’t much of an issue as long as it’s cleaned every few days. The silica crystals feel irritating when stepped on, though!

Who’s This Best For?

After the review, I believe that there isn’t much of uniqueness to the cat litter beside a small twist from the company for popularity. While there’s not much of a difference, that isn’t so much of a bad thing because at least you know it performs well.

Because of this, you do get some value out of it. I would recommend it for those who have very sensitive cats because of its dust-free properties. It’s also great for owners who HATE the typical cat waste odors because it locks it in very well. Just be aware that you’ll need to pay more for it.

This is a clumping cat litter which is made of eco-friendly materials like corn cob, making the litter natural-smelling. Offering the secret formula that combines advanced triple-action odor control system as well as well-absorbing corn, it’s claimed to clump twice as better as clay.

However, while it does have a refreshing and unique approach, its clumping abilities aren’t quite as it was claimed to be. I actually find it a bit similar to other clay-based litters, with its only difference being the smell and natural ingredients. If you want something natural and you’re willing to pay for it, this is still a good choice, though.

For an all-natural clumping litter, it does a job well done in forming solid and hard clumps. But it doesn’t really clump twice as well as clay, but rather, clumps just as similar to it. It handles feces well, though it struggles a bit with urine and the clumps are time-sensitive.

But one benefit it does have is that it doesn’t use as much litter when clumping and locking in odors. That way, you use less litter and less material is wasted, saving you a bit of money and time in replacing the litter.

The litter has no artificial perfume or annoying scents to it, having only a very subtle pine-like scent I like. It’s more pleasant than traditional litters with strong perfumes!

For its odor control, it isn’t the absolute best in locking in odors, especially since the hard clumps fall apart easily. It also doesn’t do well in keeping in ammonia fumes from urine, though it still manages to fight it off better than other litters on the market.

Ease of Use and Cleaning

Because corn is lighter than clay, it’s easier to handle when pouring in and throwing out. But because of its smaller texture, it tracks more than usual, sticking to paws and fur. Fortunately, it doesn’t track as much as other natural litters like newspaper or pine, making it a very minor issue.

Also, the clumps aren’t rock hard, staying solid but would fall apart easier than others.

Who’s This Best For?

Overall, I really like how unique this cat litter is from the rest because of its corn cob ingredient mixed with special formulas. It’s an actual all-natural litter which clumps well without the added chemicals or artificial ingredients that ruin the eco-friendly purpose. Fortunately, its unique formula is deemed effective, making it worth the price.

This is made best for those who want something all-natural without any of the traditional litter disadvantages. It’s lightweight without any smelly fumes or dust, making it great for sensitive cats with bad allergies. It’s expensive but worth it.

My Final Verdict and Where to Buy

Overall, do I see ProSense Fresh Results a worthy investment? For its price, I don’t get as much value when setting it side by side with other cat litters. But that doesn’t change the fact that this works excellently in all aspects, especially in terms of odor control and scents.

I believe that ProSense is a worthy investment for those who have the extra budget for premium silica crystal litter. And because ProSense focuses on medical solutions and pet care wellness, you know that this is for cats who suffer from bad allergic reactions. With its low dust and better odor control, cats will have a better time doing their business.

What I find weird is that you can’t find ProSense’s cat litter on their official website just yet. Their litter products aren’t fairly popular compared to top brands, but you can find them on sale in websites like Amazon from various reputable sellers. At least from these websites, you can get a few discounts or knock off the original price by a few dollars!

When looking for a quality cat litter, you have to make sure that it comes from good companies with expertise. I believe you can trust ProSense with the litter products they have to offer, thanks to its enticing scent and adequate clumping. They aren’t the absolute best, but it’s worth considering for its odor control.

I hope this Fresh Results Cat Litter review helped you find the right product for you! So don’t wait any longer and look into getting a bag of your chosen litter now.

If you have any questions or want to share your own reviews on Fresh Results Cat Litter, then comment below. Your thoughts are much appreciated.

Arm and Hammer Cat Litter Review: The 14 Best Ones to Try

Dr. Elsey’s Cat Litter Review: Is It Worth the High Prices?